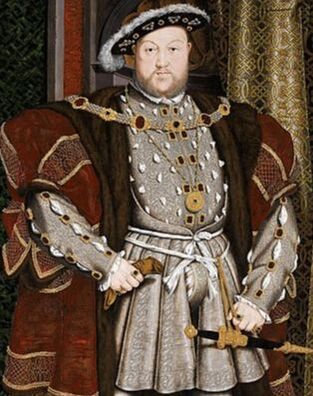 Hans Holbein (1497/1498–1543), Public Domain
Henry VII
The Winter King - YouTube  (58:50)
Henry Tudor took the throne of England at the Battle of Bosworth.  Henry VII is oftentimes overshadowed by his son Henry VIII.  This is an in-depth look at the life and reign of King Henry VII.  The narrator covers his reign and how he tried to have complete control of England.  He was a man who loved his wife and was paranoid about losing his throne.  This is the first documentary that was made about Henry VII.  *Highly recommended for research purposes.*

Henry VIII
Henry VIII: Mind of a Tyrant - (Video is unavailable)
David Starkey discusses the mind of Henry VIII, what made him the man he was.  Starkey starts with Henry's childhood and how his mother impacted his views.  Then goes into the impact of his marriage to Catherine of Aragon had on his life and the impact the divorce had on his mental state.  Actors play the roles of the people in Henry VIII's life.

Anne Boleyn Files Channel - YouTube
Claire Ridgeway posts daily content on the Tudor Period, if you have a question about the Tudor Period then this is the page to get your questions answered.  Her special feature is “On This Day in Tudor History.”  If you need a filler for a lecture or a writing prompt this would be an excellent source to use.  *Highly recommended for high school history.*

The Last Days of Anne Boleyn: (Video is Unavailable)
Anne Boleyn, the second wife of Henry VIII was executed at the tower.  This is the story of her final days and what lead up to the execution.  This documentary goes into the trial of Anne Boleyn and the events that led to it.  Several prominent historians participated in this document and it is an excellent addition to the Tudor list.  *Recommended for the high school history classroom.  Highly recommended for research purposes.*

Hidden Killers of the Tudor Home: YouTube (58:45)
Suzannah Lipscomb explores the hidden killers of the Tudor home.  She explores the garden, the impact of sugar, and a common cause of death for the Tudor.  It is a fascinating look at what killed the Tudors.  There was one hidden killer that was surprising.  It is well researched and a well thought out documentary.  Suzannah Lipscomb draws the viewer in and the historians enlighten the viewer on the hidden killers.  *Highly recommended for high school history class and independent study students.*

The Fall of Anne Boleyn: (Video is Unavailable)
Tracey Borman traces the last 72 hours of Anne Boleyn's life.  She looks at why she fell and why Henry VIII replaced her with Jane Seymour.  She goes into great detail about the events that led to her trial and execution.  It is a different look and interpretation about the events that led to the execution of Anne.  The discussion on the trial was particularly good.  Tracey Borman is an excellent narrator.  *Highly recommended for research and independent study purposes.*

*Henry VIII: Man, Monarch, Monster: (Video is Unavailable)
Historians take a look at King Henry VIII, they look at him as a monarch, man, and monster and how he became the man he became.  This is a thorough look at the different aspects of Henry VIII.  The historians dive in and try to explore the reasons why the madness.  They look at the injuries he suffered, the wives he divorced, and the health issues he had.  *Highly recommended for research purposes and independent study purposes.*

Six Wives of Henry VIII - DVD
David Starkey narrates this series on the Six Wives of Henry VIII.  He covers the marriage of Catherine of Aragon and what lead to the divorce.  The marriage with Jane Seymour.  What led to the marriage to Anne of Cleves, the break up of that marriage.  This was the first time I learned that Anne of Cleves was rejected because she didn't recognize Henry III and not because she was ugly.  *Highly recommended for a middle school and high school history classroom.*

Six Queens of Henry VIII - Amazon
Suzannah Lipscomb and Dan Jones narrate this docu-drama about the six wives of Henry VIII.  They cover the six wives of Henry VIII over four episodes.  They narrate the story of Catherine of Aragon and how she was the Warrior Queen.  Then they talk about how Anne Boleyn got Henry’s heart, then quiet Jane.  Anne of Cleeves was the ugly one.  Catherine Howard may have not cheated on Henry.  Catherine Parr is the final wife, the one who survived.  *Recommended for research purposes.*

Henry and Anne: The Lovers Who Changed History - Episode 1 (44:31) Episode 2 (44:29)
Henry VIII and Anne Boleyn are two highly controversial historical figures.  In this documentary, Suzannah Lipscomb explores their story from the start of their relationship to the finale.  The first episode explores how Henry fell in love with Anne.  It explores how he pursued her and Anne’s reaction to his pursuit.  What made the lovers fall out?  The final episode concludes with her trial and execution.  *Highly recommended for research purposes.*

Hans Holbein - YouTube (59:50)
Artist Hans Holbein was one of the artists of the Tudor Era.  He documented the Tudors and the Tudor Period.  Waldemar Januszczak introduces Holbein using a portrait of the young Henry VIII.  Henry VIII was portrayed as a young man and thin in contrast to the fat man later portraits show him as.  Holbein was not limited to painting the king, he painted people from the Tudor Court.  He also recorded British History and Januszczak contends he changed history.  *Recommended for an art class, recommended for clips for a history class.*

*England's Forgotten Queen: Life and Death of Lady Jane Grey: Episode 1 (58:36)  Episode 2 (58:49) Episode 3 (58:44)
Helen Castor explores the life and death of Lady Jane Grey, the nine-days queen of England.  She was the first woman to be proclaimed Queen of England and one of the more controversial characters in Tudor History.  She goes into each day of her reign and the activities that happened on that day.  It is a fascinating look into the life and death of Jane Grey.  It breathes new life into that story.  *Recommend for research purposes for high school history.*

The Origins of Bloody Mary - YouTube (48:21)
David Starkey explores the story of Queen Mary I from her childhood, the struggles with her father, and how she survived to become Queen.  She was the first woman who fought and won the throne in England.  He goes into details on how she ruled England and concludes with her death.  As the first woman crowned Queen, she faced questions over who she should marry and what rights she had to rule.  *Recommend for research purposes for high school history.*

Queen Elizabeth I
Tale of Two Sisters - YouTube (48:32)
Historians explore the relationship between Queen Mary and Queen Elizabeth.  They were sisters, they were both rivals for the English throne and they became enemies.  Mary was the abused stepsister.  Elizabeth was the loved child of an unpopular queen.  Mary was a figurehead for the Catholics.  Elizabeth was a figurehead for the New Religion.  It is a fascinating look at the relationship between Mary and Elizabeth.  It ended with Queen Elizabeth’s ascension to the throne.  *Highly recommended for research purposes.*

Elizabeth I - Episode 1 (49:28) Episode 2  (49:35) Episode 3 (Video Not Available) Episode 4 (49:23)
David Starkey narrates the story of Elizabeth, from her growing up years, her time under the reign of Mary I, the start of her reign as well as her avoiding the issue of marriage.  After her father’s death, she grew up in the household of Catherine Parr.  He covers the rebellions, the religious settlement, as well as the Spanish Armada.  This is an excellent documentary on Elizabeth I.  *Highly recommended for a high school history class and an independent study student.*

Elizabeth I - Episode 1 (44:39) Episode 2 (44:36) Episode 3 (44:20)
Suzannah Lipscomb and Dan Jones narrate this docu-drama on Elizabeth I from her growing up in Catherine Parr's household to her arrest to her become Queen.  Then they cover the events of Queen Elizabeth's reign.  Elizabeth was surrounded by enemies from the beginning of her birth.  Her enemies tried to take her life and her throne.  Elizabeth had to learn to play politics quickly.  It is a new look at Queen Elizabeth.  *Highly recommended for a high school history class and an independent study student.*

Abducted: Elizabeth I's Child Actors - (Video is Unavailable)
A surprising documentary on the child actors that performed in Elizabeth I's theaters in England.  Many child actors were kidnapped off the streets.  One father fought back against the child kidnapping.  He tried to get his child back.  It is a shocking look at what happened during Elizabethan England.  The child kidnapping implicated the English Queen.  *Highly recommended for both high school history and English literature classroom.  Recommended for independent study students.*

The Women Who Made History – Elizabeth - YouTube (43:33)
She was a woman who fought since she was born.  Men, queens, and half of Europe fought her.  Queen Elizabeth I was the Queen of England and the head of the church.  She had faced many storms along the way.  Two queens wanted her dead.  Men wanted to marry her to have the throne.  The Spanish declared the war on her.  The Pope wanted her dead as well.  How could this lone woman navigate such stormy waters?   *Highly recommended for a middle school and high school classroom.  Highly recommended for independent study students and research purposes.*
List current as of August 18, 2022